From Make Nashville Wiki
Jump to navigation Jump to search 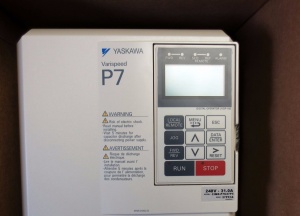 TODO explain what a mill is, what it can be used for.

The Bridgeport's spindle motor is designed for 220V 60Hz 3-phase, but at Make Nashville we only have 220V single phase. We use a Yaskawa CIMR-P7U27P5 VFD (Variable Frequency Drive) to synthesize 3-phase, and while it normally requires 3-phase input, it can run off of 1-phase if you derate it's power output. The VFD is rated for 31A and the motor requires less than 5A, so it's acceptable.

The motor normally runs at 60Hz which corresponds to ~1800 RPM (4 pole motor). The spindle's RPM is determined by three factors: the motor's RPM, the setting of the step pulleys in the head, and the engagement of the bull gear.

Speeding up the motor with the VFD is electrically safe, the only risk is mechanically wearing out the motor bearings a bit faster than usual. Slowing down the motor with the VFD can potentially cause problems, here is why: the motor is cooled by an integral fan on it's own shaft, and if the motor is still running fast enough to heat up, but not running fast enough to cool itself off, it will eventually overheat. If it's running at very low speeds it is no longer air cooling itself whatsoever, but it's also drawing such little current that it's not heating in the first place. Use common sense and check the motor's temperature periodically if running it at lower speeds for extended periods.

The Bridgeport is fortunate to have come with a Newall Spherosyn 2-axis DRO (Digital Read Out).

The main concern with the Bridgeport is that the ways (the sliding bearing surfaces) are lubricated and as free of metal shavings as possible. For the Z and Y axes there are felt wipers with aluminum clamps to keep the oil inside and the metal shavings outside. There is a Bijur "one shot" oiler system on the left side of the knee, but pulling up the handle and allowing it to slowly lower itself back down, it will inject oil into various parts of the machine over the course of a few minutes. This should be done at least once during when starting to use the machine. Oil is cheap and excessive oiling doesn't hurt!

The spindle should be oiled periodically, internally it's slowed down by cloth in a metal tube and slowly drips onto the spindle bearings.

Diagram of cast iron base with hole pattern PDF